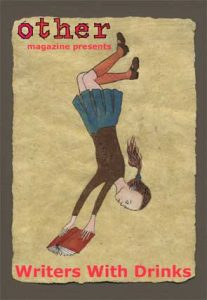 Colson Whitehead‘s new novel is The Underground Railroad. His previous books include The Noble Hustle: Poker, Beef Jerky & Death, Zone One, Sag Harbor, Apex Hides The Hurt, The Colossus of New York, John Henry Days and The Intuitionist. He has received a MacArthur Fellowship, A Guggenheim Fellowship, and a fellowship at the Cullman Center for Scholars and Writers.

Annalee Newitz is the author of Scatter, Adapt, and Remember: How Humans Will Survive a Mass Exctinction. She’s also the author of Autonomous, a novel coming in 2017 from Tor Books. She is the Tech Culture Editor at Ars Technica, and the founding editor of io9. She was the recipient of a Knight Science Journalism Fellowship at MIT.

Aparna Nancherla has written for Late Night With Seth Meyers, and she wrote for (and sometimes appeared on) Totally Biased with W. Kamau Bell. Other comedy credits include Conan on TBS, Meltdown with Jonah and Kumail, @midnight, and Adam Devine’s House Party on Comedy Central, Seeso’s Night Train with Wyatt Cenac, VH1’s “I Love the 2000s”, and Fuse’s White Guy Talk Show.

Charlie Jane Anders is the host of Writers With Drinks, a spoken word “variety show” that mostly happens in San Francisco, and the editor of io9. Her new book is All the Birds in the Sky. She won a Hugo Award for her novelette “Six Months, Three Days.”

About Writers With Drinks:

Writers With Drinks has won numerous “Best Ofs” from magazines and newspapers, and has been mentioned in 7×7, Spin Magazine and one of Armistead Maupin’s Tales of the City novels. The spoken word “variety show” mixes genres to raise money for local causes. The award-winning show includes poetry, stand-up comedy, science fiction, fantasy, romance, mystery, literary fiction, erotica, memoir, zines and blogs in a freewheeling format.