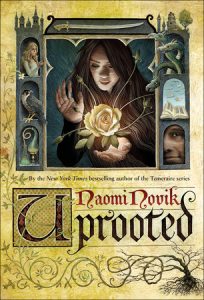 The Hollywood Reporter ran an article last week about negotiations for the film rights to Uprooted, and many of you wrote to ask about it or congratulate me.

I couldn’t say anything though because the news was a little premature and the deal hadn’t been finalized yet! But now I am so pleased and excited to be able to confirm that yes, Warner Brothers – home of the Harry Potter and Lord of the Rings movies, among many other wonderful fantasy films — have optioned the rights to turn Uprooted into what we all hope will be another series of wonderful fantasy films.

Many people were involved behind the scenes in getting this deal to happen, but I particularly have to thank brilliant producer Jeff Kleeman, for championing the book from the start, and the wonderful Ellen DeGeneres for getting behind the project. I’m so delighted to be working with them and with Niija Kuykendall and Julia Spiro at Warner.

Now comes the fun part: seeing talented filmmakers set to work, to bring the Wood and the rest of Angieszka’s world to the big screen! I’m very excited and hope you are too.